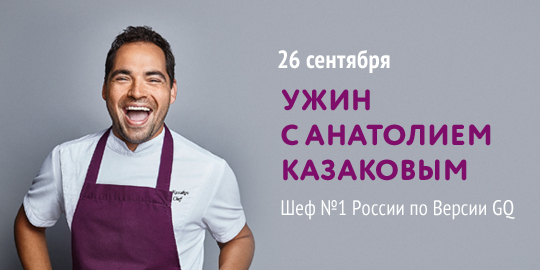 Traditions, local products and modern technology for their preparation are the three main principles on which Anatoly builds the philosophy of his cuisine. He seeks and finds harmony in a combination of 3-4 ingredients in each dish, demonstrating that even the simplest products can be truly gastronomic. The main thing is to be able to show their pure taste and correctly place accents.

The first professional achievements of Anatoly Kazakov were the victory in the Silver Triangle competition and the title of Best Young Chef of Russia, as well as reaching the final of the international competition S. Pellegrino Cooking Cup 2012.

He worked in the best restaurants in Moscow (The Most, Bon-2, Hills) and trained under the legendary Italian chef Gwaltiero Marquezi

However, his talent was fully revealed in the projects of the White Rabbit Family. In autumn 2013, together with Vladimir Mukhin, he opened the first Pan-Asian Zodiac bistro in Moscow, embarking on bold experiments with exotic cuisine. And in the summer of 2014 he headed the Selfie kitchen, where he prepares dishes that even cosmopolitans make patriots at least for a while.

Today, he is one of the brightest representatives of the new creative cuisine, who sees the support of farmers and the development of Russian agriculture as one of his main goals. In 2017, the Selfie restaurant received worldwide recognition, taking 88th place in the expanded list of the international rating The world`s 50 Best Restaurants. At the same time, the Selfie Astana restaurant was opened, the visiting card of which was the set by Anatoly Kazakov “Kazakhstan: 3000 kilometers of taste”, made from local products. In 2018, the Selfie Moscow restaurant received the highest rating in Moscow by experts of the French gastronomic guide Gault & Millau, and also climbed to 70th in the rating of The world`s 50 Best Restaurants.

This year, Selfie under the leadership of Kazakov improved his result by 5 points and took 65th place in The world`s 50 Best Restaurants.

Travel at the wineryDinner with Vitaly Istomin

Cart
Your cart is empty